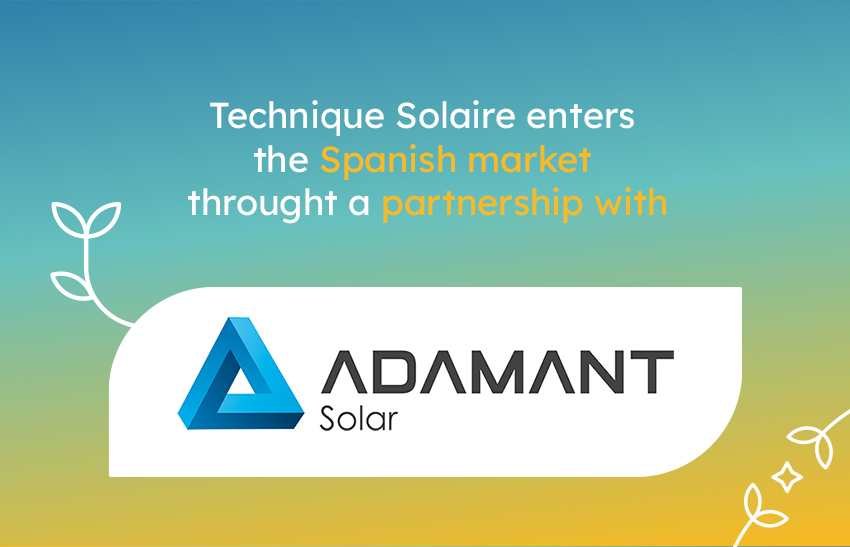 Technique Solaire has recently signed a long-term partnership agreement with Adamant Solar Iberica, a developer of photovoltaic projects based in Madrid.

Adamant Solar will take care of project development, while Technique Solaire will bring its experience, team and financing resources. In line with Technique Solaire’s strategy as an independent energy producer, assets developed under this partnership will be owned and operated by Technique Solaire.

The main purpose is the co-development of a portfolio of 150 MWp solar projects ready-to-build by 2024. The first projects are expected to reach this status by 2023, with the installations entering operation in stages from 2024 to 2026. In the long run, Technique Solaire and Adamant plan to develop and operate a much bigger portfolio in Spain.

This partnership will focus on the co-development of large-scale ground mounted subsidy-free solar PV projects, which are designed to make local impact from social and economic perspectives. However, the two partners do not exclude the development of large-scale floating projects, commercial- and industrial rooftops and solar car park canopies, in order to take advantage of Technique Solaire’s extensive French experience in this field.

This partnership is a further step in Technique Solaire’s international development strategy.

Thomas de Moussac, co-founder of Technique Solaire: “We are happy to enter Spain alongside Adamant. It is one of the sunniest countries in Europe, and it has high energy needs. Our presence in this very dynamic market is a logical continuation of our international expansion, after India and the Netherlands. We truly believe that Adamant is the right partner to address this great challenge. “

Ismael Bena, CEO of Adamant Solar Iberica: “Adamant is excited to have secured such a reliable and experienced partner as Technique Solaire for co-development and financing of utility scale green field projects, with the objective for long-term operations in Spain. This marks a significant milestone in our mission to promote sustainable change through electrification as an IPP in key European markets. Through electricity generation and supply where it is to be consumed, we strive to deliver clean energy directly to industries and local communities, through the development and construction of functional projects.”

The Technique Solaire group is a French independent producer of renewable energy. Created in 2008, it specializes in the development, financing, construction and operation of renewable energy production units (solar and methanization) in France and internationally. With a workforce of more than 140 employees, the group operates more than 200 MWp of photovoltaic power plants in France, India and Netherlands, as well as 2 biogas production units. The group targets 1 GWp of solar power in operation by 2025.

Adamant Solar is a committed Solar project developer with market presence in The Netherlands and Spain, where our expertise in development, construction and operation of Solar power assets enables the consistent growth of our portfolio consisting of land tight, floating, roof based and solar carport projects, exceeding 400MW in various stages today.

Adamant is driven by nature to change the way the world generates and consumes energy for its daily use, and so we give great attention to make sure that our projects are well integrated with the communities they operate in, while we encourage local power consumption through offtake agreements (PPAs) or through our groups EV Charging infrastructure network.