Technique Solaire is commissioning its second solar photovoltaic power plant in india, with a capacity of 27 MWp 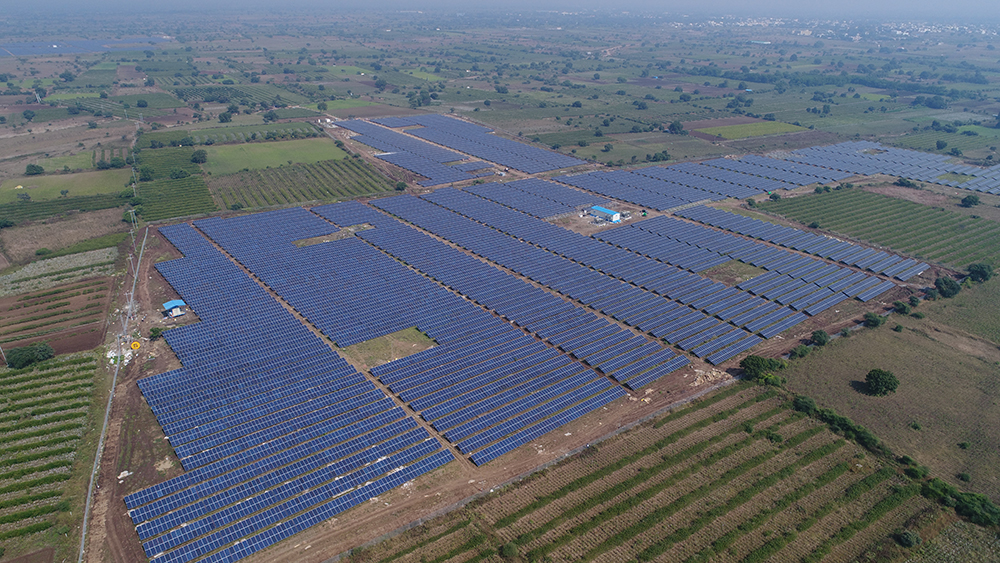 This photovoltaic installation is composed of 81,840 modules of 330 Wp and produces the equivalent of the local electricity consumption of 65,000 inhabitants.
This is the most powerful photovoltaic power plant developed by the Technique Solaire Group to date.
With this installation, we offer the lowest solar electricity tariff in the Indian state of Maharashtra.

Technique Solaire successfully commissioned its second solar project in India, in the State of Maharashtra, built on the territory of the villages of Ratnapur and Manwath in Parbhani district. This arid region of India has limited agricultural activity and we had the opportunity to acquire the land where the project is located and to contribute to local economic development and employment.

This ground solar photovoltaic plant, with a total output of 27 MWp is spread over 40 hectares, is the winner of a state tender won by our local subsidiary (JLTM Energy) in May 2018.

It represents approx. €12M investment, with senior debt financed by the State Bank of India, the largest public Indian bank.

It produces green electricity equivalent to the local electricity consumption of 65,000 inhabitants.

The first ground solar power plant built by Technique Solaire in India, with an output of 5.5 MWp, was commissioned in March 2017 in the state of Uttarakhand.

“We are very enthusiastic and involved in our development in India, a country-continent with huge energy and environmental challenges. This second project is 5 times more powerful than the first one. It is also the largest photovoltaic power plant developed and built by Technique Solaire Group to date“, explains Julien Fleury, co-founder and Managing Director in charge of Operations at Technique Solaire.

This new facility demonstrates the ability of Technique Solaire (the only French SME in the sector to operate in India) and its team to successfully implement large scale solar projects, from the development to the operational phase, in a complex and highly competitive international environment.

With the Indian government’s target of 100 GW by 2022, and the creation, in partnership with France, of the International Solar Alliance (ISA), the Indian government has made the development of solar energy a priority. “Despite a highly competitive environment, Technique Solaire intends to continue to perform well and to occupy a growing and sustainable position in this market. Our objective is to develop 200 to 300 MWp in India over the next 3 years“, says Manu Bishnoi, Director of Technique Solaire India.