Technique Solaire has set up €133 million of senior debt 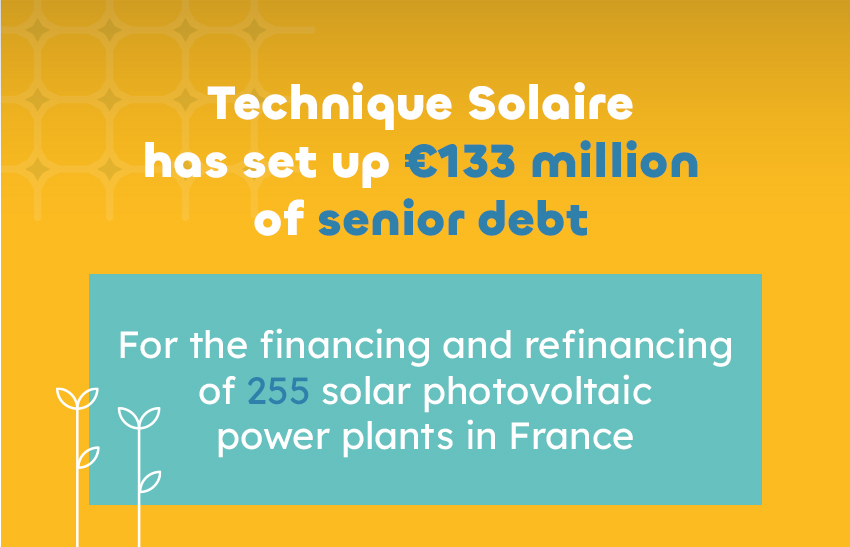 On February 8, 2021, the Technique Solaire Group finalized a financing operation, for a total amount of €133 million, with its historical partners: the Crédit Agricole Group (with Unifergie and Crédit Agricole de la Touraine et du Poitou) and Bpifrance.

This portfolio of 76 MWp corresponds mainly to Technique Solaire’s projects that were won in the calls for tenders and were awarded a tariff, issued by the French Energy Regulatory Commission (CRE) (i) Buildings 4.9, 4.10 and 4.11 and (ii) Soil 4.7 and 4.8. These include the Group’s first two ground-mounted power plants to be built in France.

This financing transaction demonstrates once again the Group’s ability to set up major financing operations on a regular basis despite (i) a difficult sanitary situation and (ii) regulatory uncertainties following the government’s questioning of certain feed-in tariffs for solar electricity at the end of 2020.

In 2020, the Technique Solaire Group exceeded its annual production targets by 1.4%. In 2020, the group produced the equivalent of the annual electricity consumption of 69,370 people and avoided the emission of 10,152 tons of CO². With a commissioning target equivalent to more than 100 MWp in 2021, Technique Solaire continues its efforts to participate in the energy transition.

Edouard Dazard, Director of Finance at Technique Solaire, explains: « With €133 million, this financing operation marks a new record for Technique Solaire. It is a good illustration of the change in size that the group is undergoing: with 96 MWp in operation and 150 MWp under construction today, fully financed, the group is preparing to bring 1.5 times more installed capacity into service over the next 18 months than that commissioned over the last 12 years. »

Lionel Thémine, Co-founder and Managing Director in charge of Finance at Technique Solaire, adds:  « This financing operation is another successful step in the framework of our Strategic Plan, which aims to own 1GW by the end of 2024. We are delighted with the renewed confidence of our financial partners; this financing allows us to look forward with serenity and envy to the next challenges of our development. »

« We are proud to participate, alongside our partners, in this major operation that will allow Technique Solaire to continue developing its ecological transition strategy, » says Sylvain Montastier, Business Manager Financing at Bpifrance. « This operation perfectly illustrates the ambitions of our Climate Plan to accelerate the environmental transition of companies. »

Johan Mathieu, Director of the France Unifergie sales network says: « Unifergie is delighted to continue the historic support of Technique Solaire in its development with ambitious but realistic objectives for the energy transition of the territories. »

TECHNIQUE SOLAIRE advisors on this operation:

Lender-side advisors on this operation:

Intervenors on the operation: